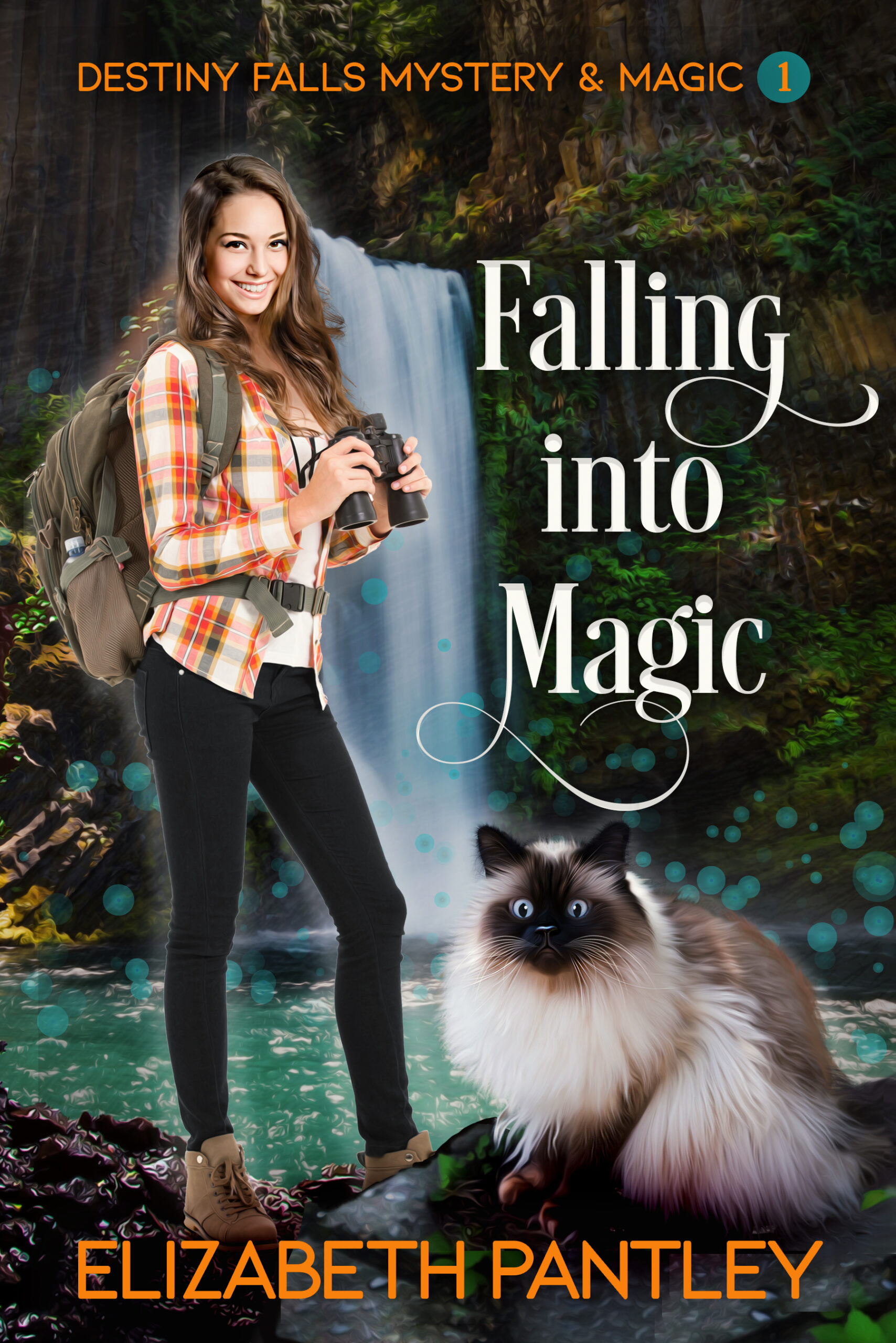 “I had a fun time reading this one.”
~ Lola, Lola’s Reviews

“A captivating read! I couldn’t put it down.”
~ Linda C., Goodreads

“Generously seasoned with sass, class, and a dose of spunk. Delish!”
~ Pages & Paws

When Hayden was a child, she lost her cat. Adults told her the cat had escaped the house and ran away, but she knew the truth. The mirror had taken her. She knew because the mirror had given her a glimpse of an alternate world and had nearly pulled her in, so she was certain the cat had suffered that fate.

. . . Twenty years later Hayden discovers the true secret of the mirror when she is thrust into it by a mysterious villain. She learns of a world she never knew existed, and a family she never knew she had. But danger brought her here, and it followed her. And now, Hayden is on a mission to see that the threat is removed, so that she can begin her wonderful new life in this magical world.

It all began when I was six and lost my cat.

Fluffball was a Himalayan rescue, the softest ball of fur I’d ever seen. I found her at the shelter and fell in love with her amazing blue eyes. I begged Nana and Gran to let me take her home. I promised I’d take good care of her, so they finally gave in and the cat joined our family.

I’d only had her a few weeks, but I loved Fluffball. Then one day, she was gone. Snap. Just like that.

They said, “Hayden, she snuck out a door and ran away.” But I knew what happened. It was the mirror.

Nana and Gran always told me I could figure anything out. They said I had a sharp mind and an abundance of curiosity. I knew I could make the drawbridge work on the castle I was building. Just a few more hinge pieces and maybe a rubber band and a paper clip. I found the pieces and worked to connect them.

I stepped back to look at my creation and caught a glimpse of it in the mirror above my dresser. I stepped closer. It was my castle I was seeing. But it wasn’t. The reflected version was glowing and floating on carpet that looked more like a cloud.

I turned around, squinted my eyes, and spied my castle. My non-glowing, non-floating castle, sitting on the beige carpet. I giggled. Nana was always saying I let my imagination run away with me. I shrugged my shoulders and turned my back to the mirror.

I added a few more pieces and was pleased to see my drawbridge could go up and down. Success!

“Look at that, Fluffball! I made a real drawbridge!” My new pet rubbed against my legs and meowed. It was fun to have a friend. Growing up with no brothers or sisters sometimes made me lonely. A cat wasn’t exactly someone to build with, but it was someone to talk to, and I liked that.

I placed my favorite piece on top—a flag I had painted. It was my castle’s crest: a shield with a waterfall and an old-fashioned goblet like the one on our bookcase.

Standing up, I took a slow trip around my creation. As I moved around the back, I saw the mirror-version castle. It was still glowing, still floating—and now, it had a small flag with my crest on top. But the flag was waving in the breeze from the open window overlooking the sea. The sea? I lived in the city and could see only the other homes in our neighborhood from my bedroom window.

As I moved closer to the mirror, I saw a child’s arm wave over the structure, and then, suddenly, a boy came into view. His eyes popped open and his mouth made a wide, soundless “O.” He was about my age, maybe a little older. He stepped closer to the mirror, tilting his head to the side, and reached out toward me. I sucked in a breath and spun around to look behind me. There sat my castle, my bedroom, my bed. The same as always. I very slowly turned back to the mirror and gasped. The boy had his face pressed up against the other side, looking directly at me!

He smiled and waved. I smiled and waved back. He pointed at his castle and then pointed at mine and gave me a wild, dancing two-handed thumbs-up. I laughed at him. He laughed, too. I could see the happy crinkles by the corners of his eyes, but there was no sound. My real bedroom seemed to fade, and the mirror room was becoming clearer.

“Hayden, time to go to the park. Come on downstairs!” Nana’s voice startled me, and I jumped back.  My own room snapped back into focus. The boy looked confused. Then he smiled brightly and motioned for me to come over to his side of the mirror to play.

I stepped forward and reached toward the reflection. My hand should have been touching the surface of the mirror, but there was no surface to touch. Nana called me again to come downstairs. My bedroom seemed wavy now, in the same way that things looked when I swam underwater in the pool. Yet the castle in the mirror was crisp and colorful.

Fluffball meowed and jumped up onto the dresser. At that exact moment, a bright flash came out of the mirror. I grabbed Fluffball, jumped backwards and landed on the floor with a thump. Then I ran downstairs and went to the park with Nana.

Two weeks later, when I came home from school, Fluffball was gone. We waited for days, hoping she’d return. We put up posters in the neighborhood. But after a while, we had to admit that my cat was gone for good. Nana and Gran tried to tell me that Fluffball must have snuck out when the front door was open. But I knew the truth. The mirror had taken her.

After that day, I didn’t trust mirrors. They even had to take the mirror out of my bedroom. Even as I grew up, I remained uneasy around them. As a teen, I learned to put on my makeup and do my hair in the reflection of the shower door or in my small compact mirror. Sometimes, when I walked by a mirror, I would swear I saw a man in there, looking at me. I came to understand that it could be any mirror, but not every mirror. It was unpredictable. Over time, I convinced myself it was a good image that I saw–like a guardian angel. He even became a welcome sight.

If anyone questioned me, I explained away my unease by saying I was superstitious, breaking a mirror means seven years of bad luck and all that, because the truth is harder to believe.

. . . Twenty years later Hayden discovers the secret of the mirror. She learns of a world she never knew existed, and a family she never knew she had.

But danger brought her here, and it followed her. And now, Hayden is on a mission to see that the threat is removed so that she can begin her wonderful new life.

About the author:
Elizabeth Pantley is the international bestselling author of The No-Cry Sleep Solution and twelve other books for parents. Her books have been published in over twenty languages. She lives near Seattle and is the mother of four and Nana to one. This is her first work of fiction.