The Disappearance of Emily 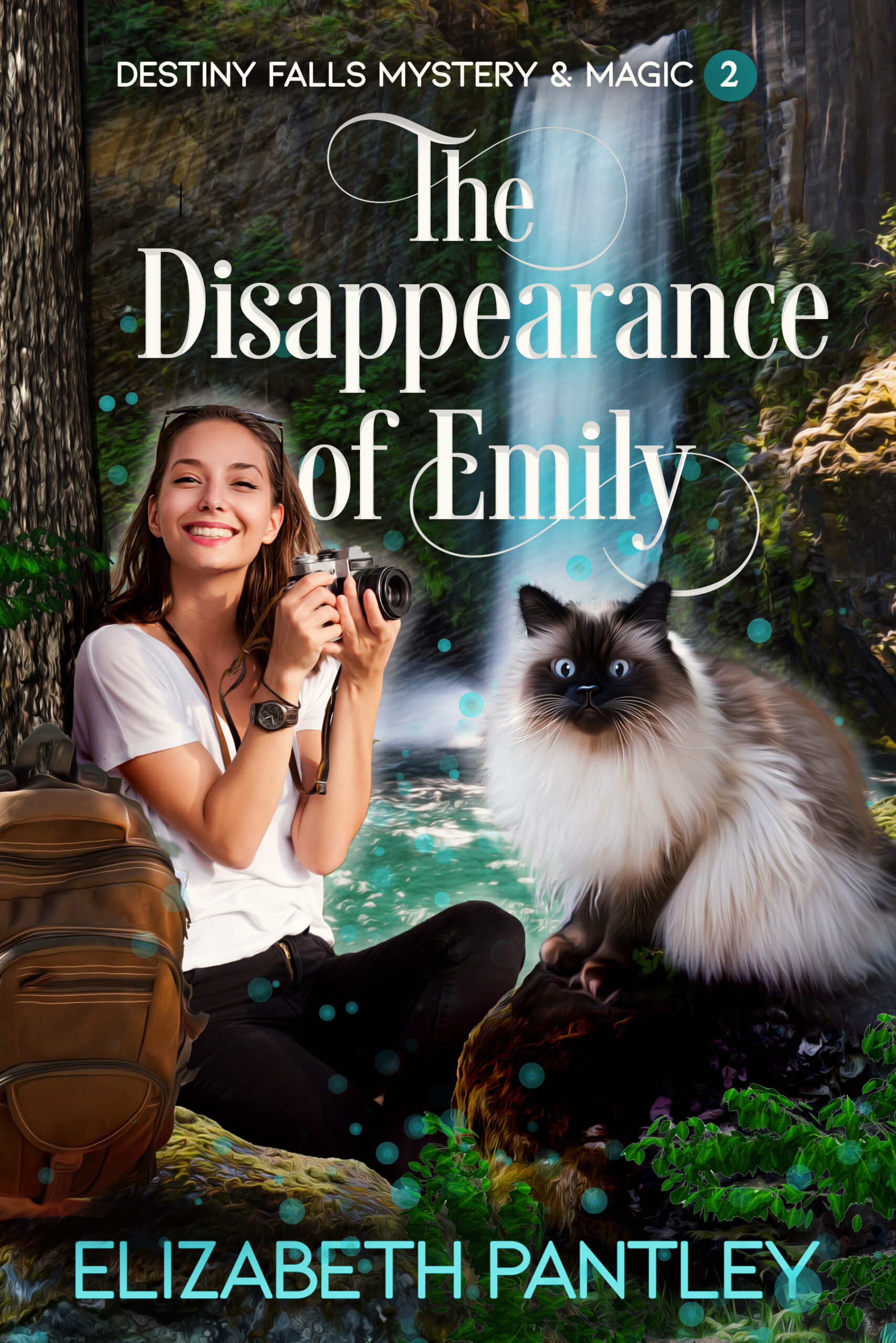 “I had a fun time reading this one.”
~ Lola, Lola’s Reviews

“A captivating read! I couldn’t put it down.”
~ Linda C., Goodreads

“Generously seasoned with sass, class, and a dose of spunk. Delish!”
~ Pages & Paws

Hayden has settled into her alternate, magical new home of Destiny Falls. She’s learning more about the people here and the enchanted place, but something is amiss. When too many things occur to call them coincidences, all signs point to the mysterious disappearance of her mother – way back when Hayden was just two days old. Can she identify and eliminate the threat before another person in her life is stolen away?

The Disappearance of Emily is a full-length magical cozy mystery novel with a touch of humor and a hint of romance. It is the second book in the Destiny Falls Mystery & Magic series.

The mountain trail was tricky. I was moving slowly through the deep snow. I knew the lake had to be nearby. It was important to find it, but I could barely see ten feet in front of me. It was steep and slippery, and I was making my way using trekking poles to assess where I should step next. My hands and feet were cold. I heard Latifa calling out to me. Where was she? What was she saying?

“Good morning, Sunshine!” Her lilting voice woke me from my dream. “Happy one-month-a-versary!” It’s amazing how accustomed I’d grown to my cat’s telepathic voice in my head.

I squinted at my fluffy Himalayan sidekick. She was sitting beside me on the bed. I stretched out my arms and gave an extra-loud yawn in her direction, hoping she’d get the hint that she had woken me up.

“Message received. Woke you up. So sorry. Got it.” She squinted at me and whispered, “Not sorry.”

I yawned at her again.

“Bet you forgot today is one month from the earth-shattering day we arrived in Destiny Falls.” Her big, baby blues were focused on me, and her whiskers were twitching. “I have appointed myself Keeper of Your Calendar. You can be so forgetful about celebratory dates.” She shook her furry head as if it were impossible to believe.

I gave another exaggerated stretch and reached over to the bedside table. With a flourish, I presented her with a small, gift-wrapped package.

“Squeeee! You remembered!” She head-butted my face and spun a little circle on the bed, then turned to tear open the package. There was more squealing as she discovered her new, feathered cat toy.

I patted my sidekick’s head and tossed my legs over the side of the bed. A glance at my phone confirmed that Latifa-the-alarm-clock was right on time. I needed to get changed and meet Axel downstairs for a morning jog into town. He was often too busy with work to join me in the morning, so it was a wonderful treat to have some extra time with my newfound brother.

My brother. How I loved the sound of that. After a lifetime as an only child in a tiny three-person family, finding out that I had siblings and a large hidden family was monumental. Add to that a mysterious, magical new world, and I was floating on cloud nine.

The only dark spot was missing my family and my best friend, Luna. I was still trying to figure out how to tell them about Destiny Falls. I’d have to sort this out soon, since my cover story of a working trip to Denmark was nearing its expiration. A month overseas was feasible, but as the timeline continued, I’d need to address my disappearance.

My Nana and Granana would be happy that I was happy. They’ve been my biggest cheerleaders my entire life. They always said my happiness mattered most to them. Both my parents disappeared the week I was born, so my grandmother and great-grandmother jumped into raising me. They were dedicated to the job, with an enthusiasm that was a complete contrast to their tiny, delicate appearances. Luna and I referred to them as the Mighty Minis, which was an apt description.

Figuring out how to explain that I wasn’t really in Denmark, but in a magical, hidden town in an unknown location was a whole new ball of wax. Especially since the town was finicky about who it revealed itself to. Any e-mails or texts I attempted to send, explaining my location, disappeared into the ether in a wisp of bounces— undeliverable, message not sent, connection lost. Even phone calls suddenly lost the signal. Maybe Axel, my brother (deep sigh of joy), could help me solve this problem.

I turned on the movie channel for Latifa, my furry little movie buff, tucked my ponytail through the back of my baseball cap, and headed out. I strolled slowly down the hallway, so I could absorb the beauty of this amazing home.

Hmm. That was odd. Where was the window seat? It was usually somewhere in my hallway, but it was oddly absent. There was a glorious swatch of sunlight, which is where it normally would be lounging. I snickered. Imagine that. A window seat that can lounge in the sun. Magic touches the Caldwell Crest home in the most interesting ways.

Caldwell Crest is a masterpiece of design. It could be described as a cozy, mansion-sized mountain cabin. I felt embraced by the sweeping staircase made of polished wood. I loved the plank wood floors and ceilings and the gorgeous but understated chandeliers. I adored the stone fireplaces that soared all the way up to the tall ceilings. The earthy colors of the décor were soothing. Even after a month, I was still adjusting to the fact that it was now where I lived.

The home was enchanting. I could almost believe the rumors that it was originally built as a castle back in the 1800s and magically remodeled many times. It’s difficult to understand Caldwell Crest and the mysterious place that was Destiny Falls, especially since the definition seemed to always be changing.

It had been a wild ride of a month since I’d been thrown through a portal and landed here.

Destiny Falls is different from any place I’ve ever known before. I had to let go of my preconceived notions of what defines a town. I still can’t quite wrap my head around the fact that the town isn’t on any map and isn’t accessible by normal means.

You must be called here by either the home or the town. Then you whoosh through time and space, to the accompaniment of a flash of brilliant light, as you tumble through a mirror. It’s a one-way trip. Once you’re here, you are, well . . . “trapped” is a harsh word for such a lovely place. However, it’s accurate. I cannot choose to leave. Destiny Falls controls the comings and goings.

I feel a bit like Alice falling through the mirror into wonderland. Albeit a much nicer wonderland than Alice had to deal with.

I’ve figured out that’s it’s easier if I just go with the flow and don’t try to understand all the nuances of this place.

It was time to get moving and meet up with my brother Axel. I love the sound of that. I’ve been an only child all my life, and now all I want to say is brother, brother, brother.

As I stepped into the most beautiful kitchen of all time, I looked around to see what was new. Some days, it was the same as before, but on others, I would find something entirely different. A breakfast nook would appear where just a window was located before. On another day, the nook would transition into a large, formal dining room.

I took a deep breath and absorbed the glorious, homey feeling that enveloped me. The wood cabinets gleamed like they’d just been polished. The acres of black marble countertops reflected the twinkling lights. The collection of pretty copper pots hung on a rack suspended on long, black wires from the ceiling high above me. The cabin-like wood walls finished off the feel of a warm, rustic retreat.

I was so busy absorbing my surroundings that I didn’t even see Axel enter the room.

“Good morning, Hayden!” He pulled me in for a hug and finished it with a friendly tap on the bill of my hat. “Ready for a run or do you want a cup of tea first?”

“Oh, tea, please!” I noticed that he already had the tea fixings set up in the breakfast nook, along with a platter of rolls and fruit. I was moved that he already knew my routine and went through this effort.

“Did you give Princess Latifa her one-month-a-versary present?”

“I did! She’s up there now, batting it around and watching a movie. I expect I’ll find Chanel up there when I return. You know, she still won’t tell me how the two of them get in and out of the bedrooms. She’s afraid I’ll put the kibosh on her freedom if I know the secret.”

“She’s not wrong there,” Axel said. “You tend to be a helicopter fur mother. Is that a thing? Fur mother? I’ve heard the fur baby phrase.”

Bright morning sunlight flooded the cheery lime green and white breakfast nook. Looking out the wall of windows, I could see a group of sailboats racing in front of us. As I sat down, I looked to my left and noticed that the window seat was located right beside the nook, with a pretty, white Persian cat asleep on the pillow.

“Ah, there’s Chanel. And that’s where the window seat ended up this morning! I’ve never seen it downstairs before.”

Axel nodded as he reached for a breakfast roll. “There’s a first time for everything.”